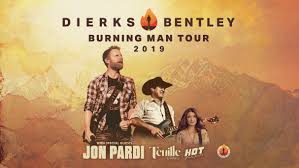 The burning man brought the heat in Florida.

Dierks Bentley rolled into Tampa on July 20 for his Burning Man Tour. Those who had been to a show of his in the past knew they were in for a great time, but they couldn’t predict what antics he’d pull.

Fans packed the parking lots early in preparation for the concert at the MidFlorida Credit Union Amphitheater. RVs, tents, beer pong, and corn hole were set up on every row of the parking lot as dark rain clouds began to close in on the party.

The rain never came, however, allowing fans to enjoy a dynamic show on a hot night in Tampa.

Bentley brought with him Canadian country singer Tenille Townes and 2017 CMA New Artist of the Year Jon Pardi. Fans began to pack the venue earlier than usual to make sure they had a good spot to watch Jon Pardi, who did not disappoint. He had them singing and dancing through his whole set.

The temperatures began to drop after sunset, and the crowd began to reach capacity as it waited for Dierks Bentley to begin. This was his tour, and the crowd waited in eager anticipation.

The burning man’s high energy stage presence made for a stellar show. Dierks frequently interacted with the crowd and did a good job of making people feel like he was there partying with them. At one point in the show he even ran down to a small stage set up in the middle of the crowd and brought a fan on that stage to shotgun beers. He played a song or two from the small stage before returning to the main one to finish out the show.

For more information on the artist or upcoming tour dates, visit www.dierks.com.