​  Flashing back to the 1970’s, one can imagine what it must have felt like to be a real rock legend. The 70’s were a different time, and the way the world viewed musicians and what they created was completely different from how it responds to music today; they were gods. The music was taken for more than just its sound, and the lyrics mattered. An artist was more than just the music that they produced, but rather the emotion and meaning behind the art that was created. It’s not often that you find a successful artist who is without a tortured soul; typically the two entities are combined into one and the artist tries to convey his message to the world without exposing too much of themself in the process.

​  In the 1970’s, a group of Rock and Roll artists started a drinking club called the Hollywood Vampires. The patrons of the bar and grill gave them the name because they never saw the light of day. The creation of Alice Cooper (Vincent Damon Furnier), the club hosted its events at the Rainbow Bar and Grill in Los Angeles – only accepting new members if they could outdrink the current members of the group. With Alice Cooper as president, Keith Moon of The Who as Vice President, and Alice Cooper’s publicist Bob

Brown as the treasurer (which begs the question who was covering the tab at the end of the night), the Hollywood Vampires also had members such as Keith Allison from Paul Revere and the Raiders, John Belushi from Saturday Night Live and the Blues Brothers, Joe Walsh from The James Gang and later The Eagles, John Lennon and Ringo Starr, and more rotating members as the years went by.

​  This group of famous men would meet at the bar and drink themselves under the table in the company of each other whenever they were in town. There would be revolving members when other influential men would visit and join the group. These honorary members, along with the usual suspects, would meet at the local watering hole and drink their fill.

​  Yet Micky Dolenz suggests that The Hollywood Vampires began as something else entirely; namely a softball team, also suggested by Alice Cooper. The group consisted of just a bunch of ‘Hollywood weirdos’ who would run around a softball field and try to win games against the local police or fire department teams and donate their winnings to charity. After their games is when they would meet at the Rainbow Bar and Grill, which officially became the home of their drinking club, and still holds a placard listing the names of the infamous drinking clubs’ members.

Over the years, the club dissolved as members went on to carry out other parts of their lives. Yet, some of the members succumbed to substance abuse issues, and some even died of overdoses. These deaths included, but are not limited to, Jimi Hendrix, Jim Morrison, and Keith Moon, who were all members of the original Hollywood Vampires. Unfortunately, with the limelight, the cost of substance abuse usually follows. The connection between fame and drug-abuse often goes hand-in-hand.

​  In the instance of Johnny Depp, his involvement in the Viper Room also saw similar issues due to overdose.

​  From these instances came the birth of the band The Hollywood Vampires, which consists of Johnny Depp, Alice Cooper, and Joe Perry. Following the history of extensive loss of their friends who experienced substance abuse issues, the band is now performing together; sans the drinking aspect of the club, as a tribute to the friends that they have lost throughout time.

​  In covering songs by some of the most incredible rock artists in history, there is always going to be a challenge of comparison. Yet with rock legends such as Alice Cooper and Joe Perry from Aerosmith, covering the songs of their friends feels tragically bittersweet. As someone who’s gained

so much traction as an actor, it’s easy to forget Johnny Depp’s musical background, while the other members of the band remind us that he can hold his own.

​  Stemming from a drinking club–which rarely discusses music amongst itself–to a tribute band, honoring the many artists who’ve lost their lives to substance abuse, has shown how far the band members have gone in their stints with fame.

​  All of the members of the band are sober and no longer live the same indulgent lifestyle that they had once been so fond of in the 70’s. Yet, the passion and love for music is still there, while you can feel the parts of the 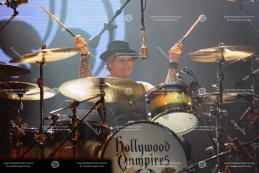 past the group has pulled with them through the present. Every time they cover a song, they bring a piece of who they have lost to the table, and they pay tribute to the artist in the only way you really can; bringing the music to the people.

​  If anything, being an old school rock star lets you in on a unique type of inside joke that not many people will ever understand. They’re more than just the Hollywood Vampires; they helped create the image the world has of rock musicians to this day, and they were a part in revolutionizing the sounds that we still listen to. It takes more than a good publicist to have one of your songs become a household name, and this type of talent is far and few between.

​  If The Hollywood Vampires are playing near you, you have no excuse not to go; you never know what blast-from-the-past rock god might appear in the crowd. 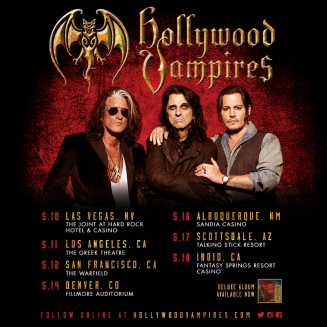